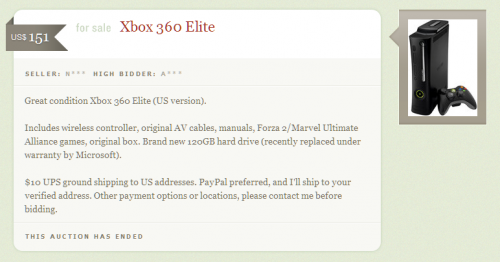 I bought it using Internet Garage Sale, which is sort of a cross of eBay meets Craigslist in a not lame way.

I swear this is not part of a quarter-life crisis or anything.

Two years ago, I banned new Sony devices from my life. As of now, the ban is over.

It’s been an interesting two years. Justifying the ban to myself wasn’t hard, however when people would ask my opinion on a device I would have to explain to them why I was not recommending any Sony products. I’m not Consumer Reports, but I’m also not oblivious to the fact that many people look to me for guidance when making technology purchases.

I was hoping that the last two years would be a time for Sony to make amends with the people of Earth and promote healing.

I am sad to report that this has not happened. Just over one year ago today, Sony released the Playstation 3 with their new Blu-ray format. There was hope that it would be Sony’s saving grace and everyone knew what the stakes were. Sony is now number three in the console wars with Nintendo’s Wii and Microsoft’s XBox 360 duking it out for first. Many things led to the P3’s failure and I believe that Blu-ray and high prices were part of that formula for disaster.

Sony now has the option of having my business, but I doubt I will be buying anything from them soon.

I Remember: Goldeneye for N64

I remeber playing Goldeneye on the Nintendo 64. I think I first played during a lunch break at school in 6th grade. It was the game to play until Halo came out. I think it would be cool to make a version of the original Goldeneye for Xbox 360 with the original graphics, especially now that Microsoft owns Rareware.