As I do every year about this time, I’m clearing out the “Favorite Quotations” section from my Facebook profile to make way for the new quotes I will undoubtedly amass in 2009. I think there are some really great quotes in here, so enjoy:

“Trust yourself. You know more than you think you do.” – Dr. Benjamin Spock

“When you have a difference of philosophy with your boss, he owns the philosophy and you own the difference.” – Former Air Force Secretary Michael Wynne on being fired

“Take calculated risks. That is quite different from being rash.” – General George Patton

“In theory there is no difference between theory and practice. But, in practice, there is.” -Jan L.A. van de Snepscheut

“Remember when math used to have numbers?” – Trevor, commenting on the lack of numbers (none actually) on one of the examples on the board in Feedback Control Systems

“Some days you wake up and immediately start to worry. Nothing in particular is wrong it’s just the suspicion that forces are aligning quietly and there will be trouble.” – Jenny Holzer

“Whenever there is a hard job to be done I assign it to a lazy man; he is sure to find an easy way of doing it.” – Walter Chrysler

“…in a free country, people are supposed to make their own decisions. You can’t legislate virtue.” -Dr. Ron Paul

Last month, we (Katie, Trevor, Logan, Tony and John) drove over to Glenwood Springs to go relax in the Hot Springs pool. I had never been there before and it was pretty cool to just be able to relax for the day.

There are two main pool areas open this time of the year, the small pool and the large pool:
From www.hotspringspool.com: 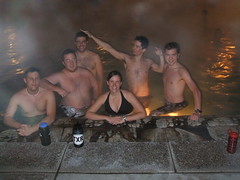 Tony says, “The pool is round and ball is that way.”

On the way to the Hot Springs, we had to make a couple of stops. Just outside the local KMart is this awesome ride. Only 50 cents too! 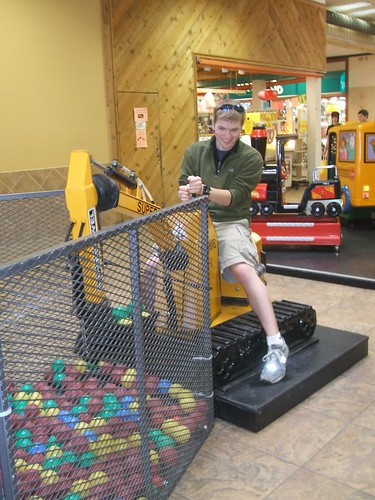 I’ve never seen so many different beers before in my life, and therein lies the problem. Being of the analytical sort, I was completely overwhelmed with my choices of beer. I knew I couldn’t taste them all, but I was unprepared for a coming with a methodology to taste what I could.

In short, I was frozen with the overwhelming task of trying to sample beer.

I basically decided that the best course of action was to follow those I knew. I followed Trevor around for a while before breaking off to go find some food.

The floor is ordered by region, which is makes it nice and easy to find the beers I knew I wanted: Alaskan Amber, Full Sail, and Buttface.

For whatever reason, The Ram didn’t have Buttface on tap! So I had to settle for the Blonde (yea, I know…poor me). Nick introduced me to the strongest commercial beer in the world: Samuel Adam’s Utopias. Holy crap. I’m not quite sure what it is, but I can assure that it does not go down like beer, and at 25% ABV1 I wouldn’t expect it to go down like a normal beer either. Oh, and at $100 a bottle, it ain’t cheap either.

I’m not quite sure what I’m going to do for next time. I’ll definitely need a better plan.

Other notes:
There is a purposely sour beer floating around the GABF. I don’t remember it’s name. I think it’s out of Nevada, but I’m not sure.

There was a free caricature artist there, Alan J. Lewis, he drew a picture of me and we chatted for a while. He’s not like most caricature artists who draw really fast. He took his time and we chatted for a while. We eventually got to talking about the Northwest and how I was from Seattle and he wanted to move to Portland. It was pretty cool and he even drew the Space Needle in the background of my caricature.

Do not drop your sampling glass on the floor. It makes a “tink tink tink” sound and everybody turns and boos you.

There are few things more amazing then a bunch of drunk people watching the Rockies play post-season baseball.

For whatever reason, I’ve had my hand pretty full since finals ended on Tuesday around 9:38am. One of the things that sucks so much about finals is that it’s pretty much just a balls to wall studying extravaganza. Time and space separate and you ignore one whilst living in the other. Having no sense of time is somewhat liberating. I remember a talking with Jacqueline Passey just over a year ago about her experiences in Costa Rica. One of the things she said was very interesting: Americans typically think of time in 5 minutes units; Costa Ricans use 30 minute increments. To be able to forgo all units of time was interesting. All I really knew was that I had an exam in so many hours and minutes and seconds. But that didn’t translate into a time of day for me.

I’ve been desperately trying to get back onto normal time so that I can function normally again. Tuesday night I went to the Denver Botanical Garden with Dave, Laura, Manya, and company to see the 18th Annual Blossoms of Light. It was good to get out of Golden. I took my camera and Matt’s tripod and had some fun taking pictures too.

Went telemarking on Wednesday with Katie and Trevor up at Winter Park. That’s 4 days of skiing this year so far. Hung out with Bailey at the Mall for a while.

And then we all know what happened last night.

Katie and Trish turned 21 yesterday though, and that was almost as cool as turning 21 myself!

The story thus far:
Katie and Trish are twins from Colorado. Katie is my buddy from Mines and her twin, Trish goes to UofA. That would be University of Alaska. It was funny because Katie told me she had a twin sister and I’ve heard that for the last 2 years, but I’ve never actually seen Trish until two days ago. I walked into Van Derwerker Lounge on Wednesday to get all my homework done for the week so I’d be free. I walk in and I see Katie, and then I see Katie again. Two Katie’s? Well, one was Trish (natch). It was weird. You could almost hear the music from the Twilight Zone playing in the background.

Thursday, I meet them (Katie, Trish, and Trevor) at Coors Lab. Coors Lab is one of the benefits of going to school at Mines. In short, you can get as much Coors-brand beer as you want every single day except Sunday. For free. Granted, you have to be 21. But still, it is free. And free is good.

Katie and Trish got a “21: The Drought is Over” t-shirt and had their three alcoholic beverages (so maybe unlimited is pushing it), while Trevor and I sucked on sodas (those are unlimited). Although Trish would ever so discreetly pour some of her drink in my cup when I finished my soda. Katie would do the same with Trevor. Then we went to this quaint Mexican restaurant, where Katie and Trish each had a margarita. Next it was round of Beer Pong and then a few rounds of Flip Cup at Dave and Nick’s house.

Then we went up to Boulder for the evening and meet up with Katie and Trish’s brother-who-is-not-related-in-any-way-but-is-more-like-a-really-good-family-friend, Nelson, and his friend. Dinner at Walnut Brewery. Trish had one of the house brews while Katie had a Cosmo that was passed around to everyone. A blow job (a drink) was issued to Trish from Nelson to help catch her up to Katie. And that was pretty much the end of it for me and Trevor as the bars don’t let those under 21 in. A shame. Two hours later, we picked up a very drunk Katie and an even more drunk Trish.

We get back to Alpha Phi and Katie grabs her things and goes over to Trevor’s to spend the night. I hang around Alpha Phi for a while, making sure Trish got some water (I made her drink three mini-Nalgene’s) and got to bed okay. I ended up leaving just before 2am.

I was thanked multiple times throughout the night and told I would make a great boyfriend (my note: someday). Trish promised to party if I came back to Colorado from Winter Break early. I might just do that. Not for her, well, not just for her. But also because after the first of the year, everyone in Seattle goes back to school and I’m left all alone: going to bed at 4am and waking up at 4pm. It sucked. If only Trish wasn’t dating. You can read between the lines. Not that it would work out. It could though. You never know. All I could think about later that night was this saying from one of my posters back home: “Having is not so pleasing as wanting. It doesn’t make sense, but it’s often true.”