After dilly dallying around for a couple months, I finally got serious about pushing the 2.1 version out the door. A couple of reasons for this actually.

First, the WordPress 2.5 is coming out end of March/beginning of April and I wanted to get out one more release (this one) before the next version of WordPress hits the streets.

Second, it’s fits with my development flow; releasing every few months when I can.

Here are the list of updates in Countdown Timer v2.1.1:

All the other changes are ‘under the hood’ and deal with code changes to make things work better in a larger variety of situations.

The Countdown Timer plugin is about three months shy of its third anniversary of public release! I’ve basically been maintaining it since the end of freshman year in college, which is when I switched to WordPress.

The first public version was v0.6. It had about 50 lines of code and used a text file to store the data. There was also no UI at all.

Version 2.1 is about 950 lines of code. Storing data in a text file is gone, instead using the WPDB. There are also several support files, including the javascript port of the countdown mechanism which is another 150 LoC.

Since the beginning of last March, there have been over 8700 downloads, which would almost pay for a semester of college if everyone gave a $1 (wink wink)!

The Hunt for Toda Mafalda

Back in my high school days, I took a couple years of Spanish. One time in class, I read this hilarious comic.

Every once-in-a-while, I’ll remember the comic and think about finding it.

Well, about a month ago, I had another one of those hankerings and spent about a week looking on the Internet for it. I looked all over, but could not find it. So I emailed my Spanish teacher, Stephanie:

I remember a comic that we read in your class (it might have been from one of the books) and I’m trying to find it. There’s a kid…

…[I described the story line here, but am redacting it to preserve the hilarity]…

I’ve searched for it high and low and can’t find it and was wondering if you a) know what the heck I’m talking about, and b) know where I might be able to find it?

Stephanie was able to give me the lead I needed:

The comic strip you’re talking about is Argentinean and it’s called “Mafalda” I used to copy some strips onto the backs of tests.

Thus, the hunt began. I first did another check on the Internet to make sure that I still could not locate it with the additional information. While I found some Mafalda strips, I could not locate the one I was looking for.

So I turned to our library. Our school library is part of the Colorado Alliance of Research Libraries, a network of libraries throughout in Colorado and Wyoming. In short, I can jump on the Prospector search engine and search through everyones books and then have it sent to my library for free! It’s really quite spiffy.

So I did that. “10 años con Mafalda” and “Mafalda and Friends“, the latter which is in English interestingly enough.

After parsing (heh, “parsing” only a programmer would use that word) through those two books, I had not found my comic. So I hit up Prospector again. This time, I ordered “Mafalda 5“, and just to be on the safe side: “Toda Mafalda” (I like saying it in the movie announcers voice).

Well, needless to say, my search is over. There, lying at the top of page 61 in Toda Mafalda was what I have been searching for. It easily been four years, probably closer to five since I’ve seen this comic. And while I didn’t remember it word for word, I was pretty close. Enjoy one of my all time favorite comics: 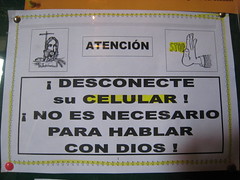