I walked back down to the Metro station and then wondered about. I eventually came across a Ð‘Ð°Ð½ÐºÐ¾Ð¼Ð°Ñ‚1 provided by CitiBank. I figured that would probably be a safe bet. 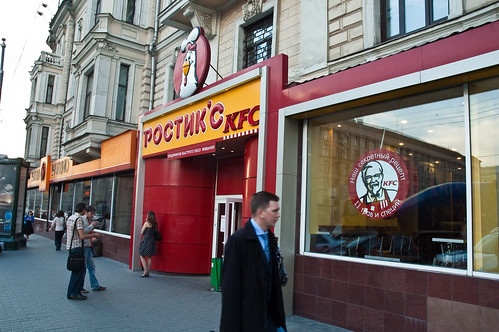 According to Eric, the one must get pissed2 on the first night anytime one is in a new city. Furthermore, since there were several different nationalities represented, International Drinking Rules applied. I had no idea such rules existed, but they do:

So, after several drinking games involving cards, dice, beer, and Russian Ð¡Ð¼Ð¸Ñ€Ð½Ð¾Ð²3, the group decides that we should go find a bar. And 2am would be a good time to do this.4

My flight for Moscow via Dulles left SeaTac at 7:30 on Tuesday morning (2 June). I had finished packing everything the night before and then unpacked it all so I could take a photograph and make sure I could repack everything: 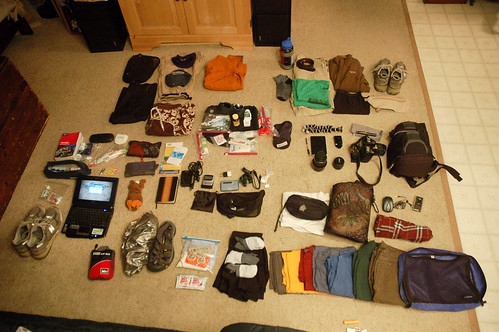 I managed to get a few hours of sleep before I had to wake up. I repacked all my stuff. Added a couple more things that I thought would be useful. I also made a last minute bag change, opting to take a larger The North Face backpack for my day bag.

The check in line at SeaTac was atrocious. However, I made it though with time to spare. I also ran into Trevor Essmeier, who was flying and down-and-back to LA for an interview.

After passing through security, I went over the Red Carpet Club. I can do such things since I’m flying United Business International. On the way in, I saw Jim McDermott walking out. Anyway, I grabbed a couple of granola bars, and a coke, called Dad to let him know I got through security. Then headed up to board.

The flight checked in full. I was sitting in the window seat next to an older gentleman who kept his Bose headphones on the entire time. I ate breakfast, watched Bride Wars, and then ended up sleeping for about an hour.

My stop over in Dulles was pretty uneventful. I made my way to the Red Carpet Club again, checking in with Dad and some friends, and had my Russian Visa verified1

I ended up staying a little to long in the Red Carpet Club, as they were looking for me at the gate. I got on, and was immediately shocked by how few people were on board. By my count, there were no more 40 or 50 people on board a plane that carries 183 people normally.

Dinner was great, and included some smoked salmon and a glass of Firestone Chardonnay2. I put my on my PJ bottoms, threw the bed into recline mode, and turned on some classical music…sleeping the rest of the 6 hours or so to Moscow.

Upon touching down in Moscow’s Domodedovo International Airport, the first thing I noted was all the planes that were parked on the tarmac. Just rows and rows of planes. We eventually got to our gate and patiently waited while the health inspectors checked our temperatures using laser/infrared temperature sensors they would point at our ear. Everyone apparently passed with flying colors and we disembarked.

Getting through customs was completely painless, I think even less so than at Heathrow3. Stamp, stamp, stamp. And off I went. I grabbed my bag and proceeded through the Customs with a wave of her hand.

Immediately, I was accosted by taxi drivers. The signs in the airport warned against using taxis, so I practiced using the only Russian word I know: Ð½ÐµÑ‚4.

I went to the ATM machine and got some rubles, then made my way to the 308 Bus. I took the bus into Moscow and got off at the Green Line Station, which was next to a shopping center with a set of stairs leading down the tunnel. I wasn’t quite sure if this was the stop or not, but I decided it was when almost the entire bus exited. I followed the mass of people down the tunnel to the subway. Purchasing a subway card involved me indicating “one”, giving the lady 100 rubles, and hoping she knew what I met. She did.

I went down the stairs and then tried to figure out what subway to take. Unfortunately, the trains weren’t marked. So I decided to hop on the first one going in the direction I thought I needed to go. As it turned out, they were all Green Line trains.

I got off at my stop and then started plotting how I was going to find the hostel.

At this point, I need to point out the biggest problem I’ve had thus far when it comes to navigating in Russia: everything is in two alphabets, Cyrillic and Roman. I can do a decent job of figuring out things, but the Cyrillic language just baffles me. Anyway, I went the wrong way for about three blocks, then back tracked and went the right way. I found the building I was looking for, but couldn’t find the white door that i was supposed to go through. I spent about 30 minutes walking around the building, wondering if it was the right building. I finally went into a dentist office and asked the guy (who I think was actually the dentist) if he knew where the address was. He kindly Google-mapped it and I did have the right building. So I threw out my assumption that the door was white and rang the door for the what I thought to be the apartment I needed. It was.

I had made it to Moscow.

Dad picked up my visa today from the Russian Consulate, which means that I’m officially going to Russia now!

The process isn’t super straight forward, so here’s a what I did:

Here’s the seat I’ll be getting to enjoy for the 15 hours it takes to get the Moscow: 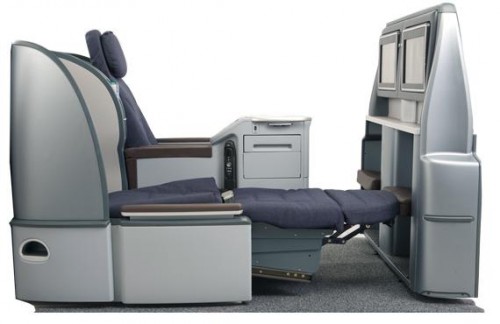 Unfortunately, United hasn’t started to upgrade the seats on the 777, so my ride won’t be as comfortable on the way back. However, I do get First Class for the Chicago to Seattle flight.

I also booked a hostel for my stay in Moscow, I’ll be at the Olimpia Hostel. Should be good.

With all that done, I figure I better turn my attention to what I’m going to bring (and not bring). Like my itinerary, this list will definitely be updated as I think of more things and people suggest things to bring or not to bring.

Many items taken from: Packing Checklist for Asia and Rick’s Packing List.

A Flight To Moscow

I’ve talked to the Russian Consular in Seattle, United Airlines, and a Russian man in Moscow with decent English.

As for actually getting into Russia, the process goes something like this:

I currently still think it’s worth it to go to Russia. But there sure are a lot of hoops to jump through. I currently have an email into the HM Hostel Moscow (US$36.05/night) in Moscow and I may end up contacting the Olimpia Hostel (US$17.35/night).