How To Know If You’re A Trekkie 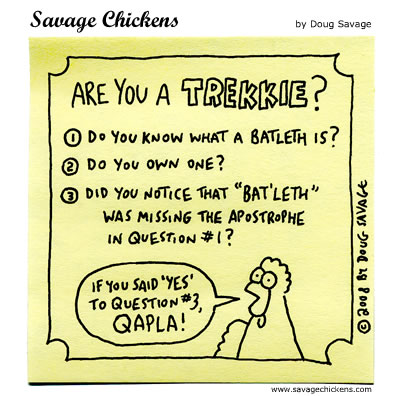 Oh, and I get bonus points for noticing that Qapla’ needs an apostrophe after it.

I’m a nerd. You should all know that by now and if you don’t, well, now you do. I happened to stumble across The Nerd Handbook. It’s a short blog post, just over 2500 words. It seems to be targeted at nerd’s significant other, however, I think there are valuable insights for everyone, such as:

Understand your nerd’s relation to the computer. It’s clichÃ©d, but a nerd is defined by his computer, and you need to understand why.

First, a majority of the folks on the planet either have no idea how a computer works or they look at it and think “it’s magic”. Nerds know how a computer works. They intimately know how a computer works. When you ask a nerd, “When I click this, it takes awhile for the thing to show up. Do you know what’s wrong?” they know what’s wrong. A nerd has a mental model of the hardware and the software in his head. While the rest of the world sees magic, your nerd knows how the magic works, he knows the magic is a long series of ones and zeros moving across your screen with impressive speed, and he knows how to make those bits move faster.

There’s more great stuff. I promise. Read it all and let me know what you think in the comments.