The Day We Fight Back 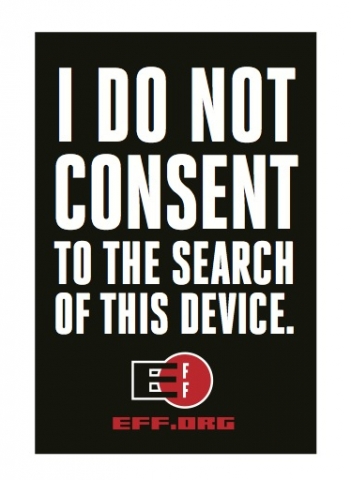 Six months ago, primarily in light of the issues concerning the NSA’s use of what I believe to be unconstitutional searches I started the process of moving my email system (which is also the email system my family and extended family uses) away from Google Apps.

Last week, I completed the technical transition to the new mail system provided by FastMail.

Today, the fight continues. I called both my Senators, as well as my Representative…yes, I called them. On the phone.

I talked to a live human being and I told them what I thought:

If you visit AFDN today, you will see a small large banner that will help you contact your Senators and Representative to do the same.

“I Do Not Consent to the Search of this Device / EFF.org” image used under Creative Commons License from EFF

One of the largest concerns I have with things like the NSA listening and reading everything I do is that they would share that information without clearly establishing its legitimate source.

The receiver of such information would need to have a plausible back story for how they came in to this information and that what “parallel construction” is.

Remember back in grade school when your friend Dave “accidentally” overheard a secret that Jane was going to kiss Tommy on the playground under the slide during the next recess? No Big Deal, except that just yesterday Jane had promised to marry you after you both graduated 5th grade.

Of course, this was a secret and Dave made you promise not to tell anyone. But you also couldn’t Tommy intervene with your plan to marry Jane.

What’s a first grader to do?

No problem, you’ll just “happen” to be playing with your trucks under the slide during next recess, “the sand under there perfectly recreates the muck most front loaders excavate during mining operations,” you’ll tell Jane.

Then you “suddenly” notice Tommy and with an inquisitive look on your face (that you spent all of lunch practicing), you cock your head to the side and ask, “what are you and Tommy doing here?”

But now parallel construction is happening for real:

A secretive U.S. Drug Enforcement Administration unit is funneling information from intelligence intercepts, wiretaps, informants and a massive database of telephone records to authorities across the nation to help them launch criminal investigations of Americans.

Although these cases rarely involve national security issues, documents reviewed by Reuters show that law enforcement agents have been directed to conceal how such investigations truly begin – not only from defense lawyers but also sometimes from prosecutors and judges.

The undated documents show that federal agents are trained to “recreate” the investigative trail to effectively cover up where the information originated, a practice that some experts say violates a defendant’s Constitutional right to a fair trial. If defendants don’t know how an investigation began, they cannot know to ask to review potential sources of exculpatory evidence – information that could reveal entrapment, mistakes or biased witnesses.

In the past, the mere fact that parallel construction occurs from secretive places no one talks about would likely be quashed by the “states secret” privilege. Fortunately, it appears that judges may be having second thoughts about allowing the government to indiscriminately exercise the “states secret” privilege as evident in Judge White’s ruling1 on the motion for partial summary judgment in Jewel v. NSA:
From www.eff.org:

In the ruling, Judge Jeffrey White of the Northern District of California federal court agreed with EFF that the very subject matter of the lawsuit is not a state secret, and any properly classified details can be litigated under the procedures of the Foreign Intelligence Surveillance Act (FISA).

Unfortunately, the NSA are likely collecting everything, contents word for word, everything of every domestic communication in this country, including content from Supreme Court Justices:

The NSA were targeting individuals. In that case, they were judges like the Supreme Court. I held in my hand Judge Alito’s targeting information for his phones and his staff and his family.

In any case, I would prefer not to deal with such …

In any case, I would prefer not to deal with such issues. It’s like shearing a piglet: a lot of squealing and little wool.