It’s said that a chain is only as strong as its weakest link. Today, we found our weak link.

LunOrediggers was the 10th pick over all to compete, however we ended up going 4th since there were less then 10 ten with entries that were competing.

We passed inspection, weighing in at just over 68kg1. We received our briefing on our allotted five minutes of setup time and then went to work. Like a well oiled machine, we were ready and set with time to spare.

Now this is the interesting part. The initialization sequence takes some time to complete. So even after power is applied, there isn’t any movement for a few seconds. However, the seconds soon changed into minutes. The judges reported that we were drawing no current, which was not a good sign.

After five minutes, we finally called it. Testing confirmed that the proper power was present at the connector. The judges reconnected the power cable to rover and powered it back on just to make sure. A few seconds later, things starting moving.

In somewhat of a confused panic, the judges quickly cut power. The issue had been that while we had inserted the plug into our connector, we hadn’t twisted it to lock it. This was simply because we weren’t familiar with the plug, which was a competition defined and provided part.

A temporary reprieve was issued as the judges went off to discus things.

Sometime later, they came back and decided they owned some of the responsibility between the mating of our technology and theirs. Thus, we were allowed to restart and run!

Round two began well enough. The rover powered up and began it’s initialization cycle. The sensor turret on the top moved around and then, nothing. Well not actually nothing, the sensor turret just kept performing its sweep. But the rover didn’t move. After a few minutes, we called it quits again; this time for real.

And that brings us back to the weakest link. What went wrong? Well, we haven’t had a formal diagnostic, but it seems to be a programming issue. The rover was positioned in a corner of the sandbox, with its front facing the corner. The IR sensors were close enough to the wall that they were being triggered before the rover even moved. Due to the way our error handling algorithm works, this caused the rover to continuously skip to the next command in the sequence, which left us standing still.

There is some good news though. Tomorrow, we’ll be testing again in a demonstration program. This will allow us to vet some of our other systems. There will be no rules for this demo, so we should be able to perform a complete cycle.

I’ll have some more updates and pictures tomorrow. However, more sleep is needed at this particular moment in time.

1 The maximum weight allowed was 70kg

We went to the CalPoly campus and checked out the sandbox we’ll be racing in tomorrow; it looks to be a very formidable challenge.

We’re still working on getting the LunOredigger ready for competition tomorrow. 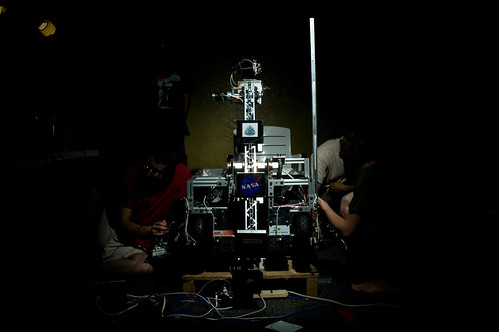 Only a few hours left though…

Over winter break, I had a chance to talk with Michael Fiorito, a faculty member at Seattle Academy (where I went to high school). He asked me to write a “synopsis of [my] scholastic and internship experiences for the alum newsletter.” The profile I wrote was just published in the Summer 2008 edition of After SAAS. The following is the original article I sent to Michael and is slightly different then the version published in After SAAS.

I graduated in June of 2004 and spent the summer having fun (as opposed to working). I started at the Colorado School of Mines in the Fall of 2004 and I’ll be graduating in May of 2009 with a Bachelors of Science in Engineering with a Specialty in Electrical Systems and an Area of Special Interest in Mechanical Systems.

I interned in the IT department at Nordstrom in Downtown Seattle the summer after my freshman year. It was a great experience and a great primer for working in the “real world.” Contrary to popular belief I was not a secretary and did not have to fetch coffee and make copies for the higher ups. My time at Nordstrom was spent helping with the 4th release of the Point-of-Sale system and included everything from helping run tests after the builds were updated (called smoke testing) to creating a database to help coordinate the nationwide training process to creating materials for the training processes.

I went back to school and studied some more. I was also the Chief Engineer for Mines Internet Radio, a new club on campus that was formed to broadcast music and sports games to students, parents, faculty, alumni, et al. We received funding from the school and I spent a large majority of my free time setting up computers, a server, remote broadcast system, website, and all the other things that fell under the per view of the Chief Engineering (which, as it turned out, was a lot). I also applied to, and interviewed with, the CIA; although I did not get in (they rarely accept students who are not juniors or seniors). However, an internship at Boeing ended up finding me. So the summer after my sophomore year, I worked at Boeing at Kent Space Center in Kent, Washington for the Integrated Defense Systems division (side note: the Lunar Rover was built in the building next to where I worked). I was tasked with writing code for a pending upgrade to the United States Air Force AWACS (Airborne Warning And Control System) fleet. In a word, the experience was: phenomenal. I had a fantastic mentor, an excellent boss, working at a fantastic job, doing something exciting.

I went back to school again, studied even harder and decided to come back to work for Boeing again (at the end of the previous summer, they had invited to me to come back again and placed me on Educational Leave of Absence). So I came back to the same group (USAF AWACS upgrade). But software programming wasn’t my thing. I had made this known at the end of last summer and on my last day, I asked what my other options were. I sat in on a meeting with the Mission Computing Hardware group and so I made my home there for this summer. My job this was a lot more interactive. I designed, updated, marked up Interface Control Documents (large drawings and documents that show where cables connect to, what type cable it is and what type of connector is needed). I also was tasked with selecting some of the hardware for the AWACS. Again, I had a great time and learned even more.

I’m now a non-graduating senior (4th year) with the end in sight. I left Mines Internet Radio at the end of last year to pursue other endeavors and I’m currently involved with a team on campus that is working on building a rover for a NASA contest to scoop up 150kg of lunar regolith (moon dirt) in under 30 minutes. I’ll be taking a three week field session this summer (a requirement to graduate from Mines) and then heading back to Boeing where I’ll work with the same group, but a different project which is to be determined.

Other things of note: