With some help from Michael and Paul, I finally passed the lead climb test for the wall at Mines.

I think my next goal is going to be lead certified at ROCK’n & JAM’n. It’s going to be quite a bit more difficult since there’s an extensive overhang: 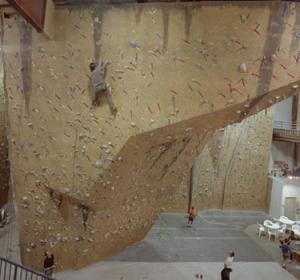 It starts in the middle of the image and goes to the upper right.

As I alluded to earlier, I’m in a climbing class at school. I’ve been climbing more and more over the last few years. Two summers ago I bought shoes and a chalk bag; last summer I bought a harness, locking carabiners, ATC (which actually stands for Air Traffic Control, but it’s a belay device), and some loops of webbing. See: Rappelling at Exit 38. I also started lead climbing over the summer and I really enjoyed it. Lead climbing is different from top roping in that you drag the rope up with you instead of having it already in place.

It’s provides a different kind of (relative) danger/excitement that keeps you safe while offering more of a challenge.

Our rock wall at school just started certifying students to lead on the wall. In order to pass, you have to climb a 5.9, take an unannounced fall (to test the lead belayer), and then complete the route.

Yesterday I decided to try for my certification. The route I chose was a 5.9+ with an overhang (I’ll try to get a picture of it at some point). I had climbed this particular route several times before and even mock lead it earlier.

I went up about six quickdraws and took my unannounced fall.

Falling while lead climbing is very interesting. I’ve had my share of falls while leading and they’re always…interesting. You end up falling quite a ways, maybe three or meters on average because you’re almost always climbing above your last quickdraw. So you fall at least twice the distance your are above your last quickdraw. Then there’s usually some amount of slack in the line, so add that on. And finally the rope is a dynamic, which means that it will stretch a bit as you fall.

Having a dynamic rope is a necessity as it pretty much breaks your fall and makes for a nice and relatively soft recovery, making for an exerience nothing like you’d expect.

After getting back on to the wall, I continued my climb up again. And fell again (on accident) while doing the reach-up on the overhang. I blame that on the fact that I had already been climbing for 2.5 earlier that day. I finally did make it to the top and hooked into the anchors. And that’s when I made by fatal failing mistake.

Z-clipping happens when the climber grabs the rope under the last clipped quickdraw. In other words, on the rope going to the belayer. Then attempts to clip the next protection using that rope. This usually happens when protection is close together.

I got back down to the bottom and we discussed it. I wasn’t too disappointed because I did get to lead climb. I signed the form stating that I failed (which is on record until I pass). I can try again the next day (i.e. today), but my arms (specifically my deltoids) are pretty sore.

Forward to time index +0:20 to see what a lead climb fall looks like. Also note that this guy is doing an announced fall (i.e. his belayer knows that he’s going to fall) compared to our required unannounced fall: