TBTL is Too Beatiful To Live

The show known as Too Beautiful To Live (TBTL) was, after all, too beautiful to live. The vogons over at KIRO management seem to be…well, I have no idea what they’re doing. In any event, this was the announcement up today:

Big…Huge Announcement: TBTL will end as a radio show tomorrow night. BUT, (there’s a huge but) we will live on as a podcast at www.tbtl.net

At least I got to meet Luke… 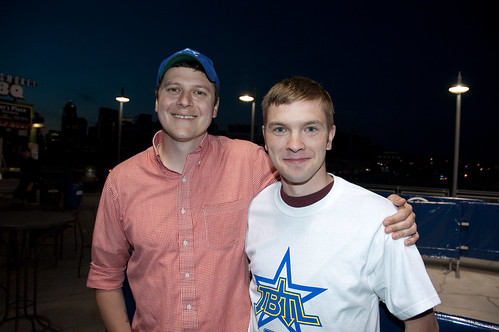 P.S. Don’t forget to order your tshirts! Only 15 bones!

P.P.S. I hope heads roll for this one.

TBTL (a radio show on KIRO-FM hosted by Luke Burbank of NPR/KUOW fame) is going to a Mariner’s game this Thursday, May 21st, against the LAA. Tickets are in Section 345/346/347 (view reserved, far left field, upper deck) and cost $10, which is half of what they normally cost. It also includes a free t-shirt.

I’m going and was wondering if anyone else would like to join me? The crowd should be of the young/hip variety (as opposed to the old fart variety), and should be pretty fun.

The promo code is TBTL.

A Chat with Mr. Bryan Styble

Many years ago, I decided to put my phone number on my website. I got the idea from Robert Scoble, who lists his number on his site.

Scoble has great reason to put his phone number up: he’s a connector. People have an idea and they want to pitch it to him, or perhaps they see something interesting in the news that they think Robert may not know about, but should. It’s easy, it’s fast, and I bet it has a pretty good signal-to-noise ratio.

I really have to reason to post my phone number except that people may need to contact me and I almost always have my phone on me. Such is the case of Bryan Styble. For those unfamilar with Styble, he’s a radio host on KIRO 710 in Seattle. He used to be on quite a bit the last few years, but KIRO went through a really nasty shakeup in their lineup and only recently has it settled down. Bryan is now back on for the weekend; not as great as before, but better than nothing and certainly better than the Midnight Trucking Radio show that ran for a handful of weeks in late 2006.

Bryan Styble called me up, to thank my for mentioning him in my blog. (I enjoy listening to him, so it really wasn’t that big of a deal.) We chatted for a good while about various things and I have to say that Bryan is even cooler to talk to on the phone than he is listening to on the radio. I guess I’ll have to call him up more often now. We talked about previous Seattle radio station call letters, the state of live and local late night talk radio, some interesting trivia about syndicated radio (I won’t spoil Bryan’s rather interesting trivia, you’ll have to ask him yourself. I will say that I didn’t get it right.), past KIRO talk show hosts, the history of the underline, and more. We talked for almost 45 minutes, I easily could have talked for another 45 minutes…probably more.

Styble also picked my brain a little bit on blogging. So I gave him some suggestions. Asking questions really got me thinking about some of the techniques and tricks that I use when I blog. I hope to write about that sometime in the future.

It was very cool and I had a great time.

In the meantime, be sure to listen the Bryan Styble Show on KIRO 710 AM. Saturday and Sunday nights from 10pm – 1am. If your like me and don’t live in Seattle, you can listen live over the Internet, mms://wmc1.liquidviewer.net/KIRO.