For Halloween this year, I was Bill Nye, The Science Guy: 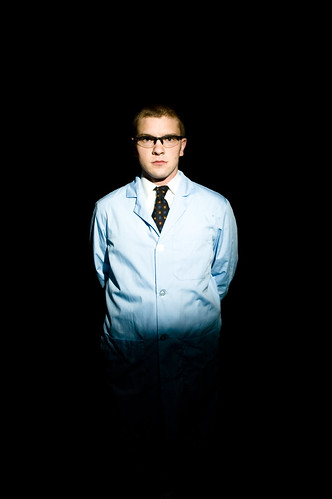 I was not in possession of bow-tie at the time I took this picture, so the look is a bit incomplete. But I think you can get the jist of the outfit. Total cost of costume: $0.00. Thanks to Charity Braz (for the scientists coat) and Jens Jensen (for the bow-tie, not pictured).

On a side note, I think it was apropos that I went as Bill Nye. We both are engineers, we both work(ed) at Boeing, and we both lived in Seattle. Although, I’m not anywhere near as cool as Bill.

Last in the Cat Pack

Back during sophomore year, I was living with Ben, Chris, Mike and Jens. We also picked up three cats: Dunstan, Kitty and Quantum…the Cat Pack. Dunstan is my cat and Quantum and Kitty were Ben’s. Last year, Kitty was hit by a car and Ben had to put him down.

Ben is Chicago looking at graduate schools, but Chris came over today (we’re flatmates now) and wanted to know what I was doing. He hadn’t seen Quantum in a few days, which was unusual, so he went out looking for him.

And now there is one. I’ll be keeping Dunstan in now for sure (at least while I’m living at this location) since I used to let him roam outside on the warm days.

Knowing
If I had known that on that day our time was near the end
I would have done things differently, my forever friend.
I would have stayed right next to you deep into the night
but I thought I’d see you in the early morning light.

And so I said “Good night” to you as I walked in through the door
never thinking of the time when I’d see you no more.
But if I had known that on that day our time was at the end
I would have done things so differently, my forever friend.

Written by Sally Evans for Shoo-Fly

Lodging for Next Year

I signed up for a dorm room last week. However, it now looks as if I may be living off campus. Ben, Chris, Mike, myself, and one yet-to-be-named person are getting very close to renting a 5 bedroom house less than a half mile from the center of campus and about two blocks from the Hall of Justice (see the picture for satellite image). I’m really looking forward to this for multiple reasons.
First, I would have my own room all to myself.
Second, I wouldn’t be forced to buy a meal plan (which is required if you live on campus) and eat the awful food at the cafe (we’re ranked #2 for “Is it food?” only behind St. Bonaventure University).
Third, I would save money.
A Double room in the Traditionals costs $3,300/year and the meal plan is another $2,912.00. All told, that amounts to $776.50/month. The house we’re looking at would be $340/month plus ~$40/month for utilities which includes gas, water, electricity, cable, and internet access. I would probably forfiet my deposit at CSM, but I would save so much more.

EDays started today and thus far it has been awesome. Ben girlfriend, Sarah, came down from CU. Then we headed out to the IM fields. Ryan, Charlie, Mike, Jens, and Chris joined us shortly after that. I rode a mechanical bull, boxed with Sean using huge boxing gloves, raced Ryan on the Bungie run, fought in the Gladiator ring, and oh so much more. There was a guy who juggeled chainsaws and then the fireworks. Oh the fireworks, what an expierence that was. The show lasted about 30 minutes (starting at 9) however people start lining up around 8. The fireworks are placed on the football field and the people sit in the stands. For the entire 30 minutes, everybody was cheering and the fireworks were soooo loud. Definatly something not to be missed, ever. There’s some dancing going on now, so I’m going to go to that.

Check out the photos and video