Why I Hate Politics in General: Reason #382 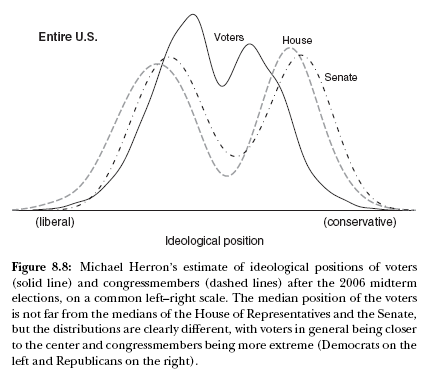 from Left-right ideology of voters, congressmembers, and senators via Kottke

I typically don’t blog about new Google stuff, especially APIs (application programming interfaces). However, this one is particularly cool because it allowed me to easily finish up a project that I had shelved for several months (maybe years? I’ll just call it ‘a while back’).

A while back, I had this idea to chart monthly blog frequency. I had found some code that did a pretty bang up job of making graphs using just PHP. However, it wasn’t the sleek looking graph I was hoping for. I had bookmarked a few sites that had Macromedia Flash applications that you could just drop the data into, but I never got around to playing with them.

Finally, Google introduced the Google Chart API. In a nut shell, I can easily create graphs such as:

This chart shows my blogging frequency for the month of November. The code I’m using on the back end is pretty crappy (I literally just patched some code I already had) and it can only handle a single month at a time.