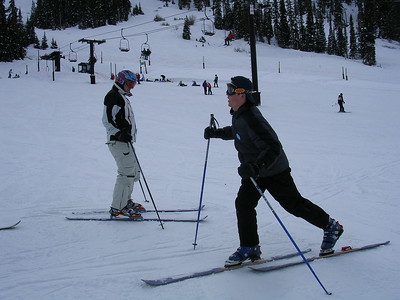 So I went telemark skiing with the newly formed CSM TeleSki club. This was their first (or second, depending on who you ask) outting. This story is sort of interesting, so just hang with it.
I was originally planning on going skiing with Liz Purdy yesterday. However, that shifted to tomorrow so that we could ski all day (I wasn’t going to be done with class until 12). So here I am, eating dinner at the Cafe when I run in to Rachel Doyle. That was actually kind of exciting because I was worried that she might have left CSM because she was mentioning that she might no come back next year in last semesters Earth Lab. Anyways, she is roomates with Katie Gallagher whois the co-president of the CSM TeleSki club (although I didn’t know this at the time). After I was done eating, I grabbed my desert and headed over to their table to chat it up. Making small talk, I asked what they were up to this weekend. As it turned out, they we’re going to go Telemarking tomorrow. They asked if I wanted to go and I said yes, stating that I wasn’t going to do anything else tomorrow and they were saving me from a full day of boredom. After dinner, they were on their way to Alpenglow to rent tele equipment because Rachel didn’t have any. So I came along so I could rent equipment too.
So this morning we headed up to A-Basin and I spent the day learning how to telemark and I have to say it’s pretty awesome. I’ve been skiing for about 15 years now and teaching for the last 4, so this was a welcome digression to something new. So yea, check out the pictures.

Many interesting things have been happening since I moved down to Morgan Hall. First, it takes less then two minutes to get from bed to breakfast. Second, the sense of community is much greater. There have also been many more opportunities to do extracurricular activities, such as IM 5-man soccer. And Telemarking with the CSM TeleClub. On a slightly related note, I saw Rachel Doyle today (duh!). I was worried that she might have left CSM because she was mentioning that she might no come back next year in last semesters Earth Lab. Anyways, she is now rooming with Katie Gallagher who is sort of like Peter Walchenbach, but a girl, much hotter, she teleies (doesn’t alpine), and competed in Junior Olympic Kayaking. Anyways, she seems like someone I would consider dating. We’ll see. I’ve talked with her only a handful of times, however tomorrow should provide some opportunities to learn more.

Skiing with the Purdy’s got pushed back until Sunday, however, I am going to go telemarking with Rachel, Katie, and the newly formed CSM TeleClub. I’ve never teled before, so this should be fun! Robin Williams calls the winter biathlon a Nordic drive by because you telemark between shooting points.