More Conflagrations of a Musing Mind

After Friday nights encounter, I’ll admit that I was pretty much on cloud nine. Getting up to this point had been fraught with difficulties, but I was there. What next? When she gave me her number, it was with the instructions to call the next time we were having a party. Thus, the goal was to schedule a party ASAP.

Fortunately for me, Seafair coming up and after much consideration with my cohorts we were able to pull together a small group of friends to go out on Peter’s Whaler.

Saturday morning rolls around quickly enough. I pick her up, we chat about the week. She’s had some car trouble (blown radiator) and issues with a new employee. I’ve been having a butt of a time with the ICDs (interconnect drawings) and that’s that.

Get to Peter’s house boat and chat about music. I find out she like Punk Rock. I make a mental note to explore that genre. We eventually get out on boat only to find it almost devoid of gas. Everyone (sans Peter, Ben, and Tresa) get off at Ivar’s

Now the absolute worst thing that could happen at this point (assuming a finite set of realistic possibilities) is that we end up getting to the point of dating. Why is this bad? Let me lay it out:

I leave in 11 days to head back to Colorado to start school in 14 days. In September, she leaves for Italy.

I would be fooling myself to think that a long distance relationship would work. Yes, it might. But honestly, it would probably be too stressful. I’m

I’m still trying to figure out whether it’s infatuation or musing.

As part of my Introduction to Space Exploration class for last semester, we had to do group projects. Initially, our group wanted to go to Children’s Hospital and do space-related activities with them. Unfortunately, there was some bureaucracy involved and it ended up not happening. Scrambling to find something else, I asked Dad for the name of his old climbing buddy, Dan, who works at Boeing here in Denver, hoping he might be involved in whatever Boeing has space-related in Colorado. Boeing does have space stuff, unfortunately Dan was unable to help us. He was, however, able to give me a contact, Roger, at Lockheed Martin who is working on Orion. And that’s where we went on warm spring Friday a few months back.

Roger works on the Launch Abort System (LAS) for the Crew Module. And I have to say, it’s a very exciting project…at least from what he was able to show us.

Up next: What is Orion?

Circuits: C
MEL Lab: A
Mechanics of Materials: C
Thermodynamic: C
Differential Equations: B
Probabilities and Statistics: B
Introduction to Space Exploration: A

Couple of notes, 1.98% off from a B in circuits. I email my professor, here’s his response:

I looked over your grade again just to make sure that I had it correct. Everything looks right, and there is no mechanism for raising your grade. I do appreciate your effort in the class and your desire to keep pushing. That will take your farther than a higher grade in this one class in any case.

A great while back I submitted an image for the New Horizons time capsule.

In 2006, The Planetary Society sponsored a worldwide contest, in conjunction with the New Horizons mission, to choose images for the New Horizons Digital Time Capsule — a message sent from those who saw the spacecraft launch 13 months ago, to those who will inhabit Earth when the spacecraft arrives at Pluto. Fifty images submitted by people in 17 countries have been selected for that capsule, and New Horizons’ encounter with Jupiter on February 27-28, 2007, will mark a countdown to its closing for the next eight years.

Here’s the caption I included:

Fire at the Old Capital Grill in Downtown Golden, Colorado. It was built in 1863 and served as the Territorial Capitol for Colorado until statehood was declared and the capitol moved to Denver. The Capital Grill is currently under renovation.

The capsule will be opened in 2015. I’ll be 29 years old by then, probably married, maybe even have a kid (ok, that’s a little scarry). I will have most likely completely forgotten about the time capsule.

I setup an email to be sent to me on January 1st, 2015 via FutureMe.org. I wonder if I’ll still even have the same email address.

I was reading gapingvoid today. Hugh’s comic pretty much sums up my thoughts on PowerPoint:

I’m convinced that less then 1% of the population knows how to use PowerPoint. I’ve been sitting through my Introduction to Space Exploration class and I can’t tell you how horrible all (not some, all) of the presentations have been. Yellow text on a black-to-dark-blue background, tons of information on each slide, the presenter reading off the slide, verbatim. Worse yet, the slides aren’t available online! This also isn’t a problem unique to our school, we have presenters from the likes of Lockheed Martin, Ball Aerospace, and guest lecturers on a weekly basis. Every one is plagued by the same problem.

I’ve updated my resume in preparation for career day tomorrow (which I may or may not go to).

While my actually number of posts were down, site popularity increased. This was also the first full year that I’ve used flickr, so bandwidth was also decreased quite a bit. I’ve very happy about the almost 200% increase in comments. That means people are reacting to what I say…which is part of the point of having a blog (although not always the point).

Google was the most used search engine to reach my site.

Inktomi Slurp (Yahoo!’s crawler) was the most active bot on my site.

As reported by AWStats and mySQL.

Yes, I Will Conceede That In Fact You Are An Idiot

Be forewarned: This post falls under the category of rants about technology and the people who don’t understand them, even though they should.

I was browsing Bob Brinker’s Money Talk on Demand site and came accross a piece of information that causes some concern:

We have not tested or configured this service to work with this browser. If you are using Firefox as your browser and are experiencing problems, please close all windows and open Internet Explorer.

This, by itself, would cause me to wonder what Mr. Brinker is paying his web site developers for. What’s even more startling is this note:

If you do not have another browser available on your computer, Microsoft Internet Explorer or Netscape Navigator can be downloaded by going to the links provided below.

Netscape Navigator? Are you seriously supporting a browser only has (wait for it) 0.15% of the browser market and comes in at #5; over Firefox, which has 11.79% market share, comes in at the #2 most popular browser, and is the only browser to actually give Internet Explorer a run for its money in the last half-decade?

While I’m on the subject of IE7, I ran the Acid2 Test on it. Horrible still. The Acid test is designed as a way to check standards compliance and ability of browser to handle non-compliant CSS and such. It’s not designed to test for everything; instead, it tests for practices that web developers are looking for in a browser. For the long winded explanation, see http://webstandards.org/action/acid2/guide/.

What the image is supposed to look like is displayed in your upper right (ignore the bottom reflection thingy, that’s just me trying to be cool with some fancy JS). 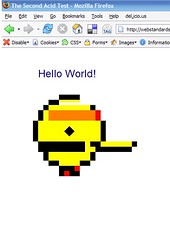 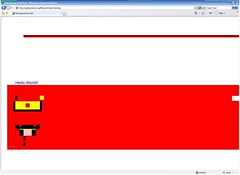 …at least among the savvy computer users.

Take a look at http://www.ieaddons.com/, Add-Ons for MSIE. To me, it looks likes Microsoft version of Mozilla Firefox’s https://addons.mozilla.org/?application=firefox, Firefox Addons. There are two major differences though. First, look how sparse the IE addons are? Granted, IE7 is still Beta2, but I’d expect tons more addons by now. Second, take a look at what the addons for IE cost. That’s right, you can get IE7 for free, but if you want to extend it’s functionality you’d better be ready to shell out some green.