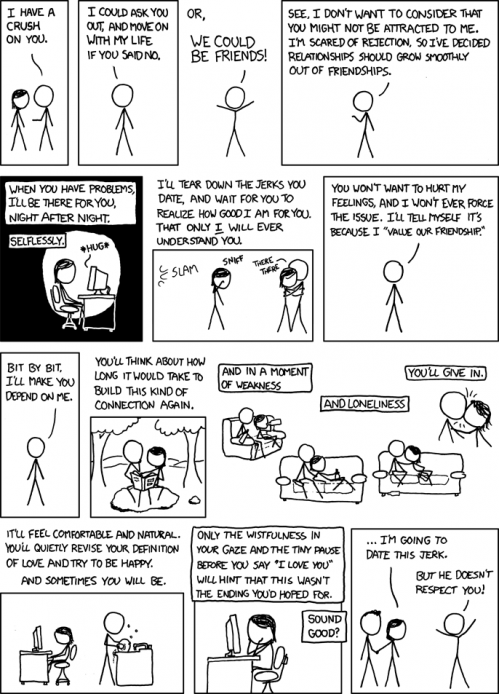 0. Newtonian gravity is your high-school girlfriend. As your first encounter with physics, she’s amazing. You will never forget Newtonian gravity, even if you’re not in touch very much anymore.

2. Special relativity is the girl you meet at the dorm party…

There are nine in total. Worth reading if you enjoy this sort of thing.

I can’t remember where I picked this tid-bit up, but a study conducted by National Wedding (they’re British) says that the time between the first date and the proposal is two years, 11 months, and eight days….so about three years.

XKCD really needs to get out of my head. Two notes on this comic: A) is validates the long standing rule on minimum dating age (aka standard creepiness rule) of [(your_age/2) + 7], which I first heard on the Bryan Suits show when he was still at KIRO, circa 2001-ish. 21) this is a comic of hope. After having been to a half-dozen weddings this past summer, one can’t help but to feel a little out of place. I’m certainly not in any rush, but at the same time, I don’t have a plan either.

More Conflagrations of a Musing Mind

After Friday nights encounter, I’ll admit that I was pretty much on cloud nine. Getting up to this point had been fraught with difficulties, but I was there. What next? When she gave me her number, it was with the instructions to call the next time we were having a party. Thus, the goal was to schedule a party ASAP.

Fortunately for me, Seafair coming up and after much consideration with my cohorts we were able to pull together a small group of friends to go out on Peter’s Whaler.

Saturday morning rolls around quickly enough. I pick her up, we chat about the week. She’s had some car trouble (blown radiator) and issues with a new employee. I’ve been having a butt of a time with the ICDs (interconnect drawings) and that’s that.

Get to Peter’s house boat and chat about music. I find out she like Punk Rock. I make a mental note to explore that genre. We eventually get out on boat only to find it almost devoid of gas. Everyone (sans Peter, Ben, and Tresa) get off at Ivar’s

Now the absolute worst thing that could happen at this point (assuming a finite set of realistic possibilities) is that we end up getting to the point of dating. Why is this bad? Let me lay it out:

I leave in 11 days to head back to Colorado to start school in 14 days. In September, she leaves for Italy.

I would be fooling myself to think that a long distance relationship would work. Yes, it might. But honestly, it would probably be too stressful. I’m

I’m still trying to figure out whether it’s infatuation or musing.

Mutual irreconcilable differences. Can I really get away with calling it that? Maybe. Long story short, Sarah and I are no more…well, at least not dating; we are still physically intact, both of us. And still friends, which is always good. That’s really all I have for now.

I’ll make this short and quick.

Yes, I am going out with someone. Her name is Sarah.

The rules are as follows:

As a note to all, this is uncharted water. Forgive my ambivalence about it.

And Thus It Is Confirmed

You can take me off the blocks, I have a girl friend. I’ve confirmed it, she’s confirmed it. She talked to other people about it. There’s no doubt about it. Which is good. So we’ll see how this goes. New waters here, should prove to be interesting at the very least.