Generally, I try to be content with how things are. This has been a challenging mix of rejecting the status quo when I believe it is required but also not getting sucked in by Shinny Object Syndrome (rushing off to the next latest and greatest thing, what I think George Leonard would call “The Dabbler”1). This has been a careful mix because I feel like I’ve spent much of life “moving on” from one thing to the next, always trying to reach some je ne sais quoi.

Since I graduated from college, I’ve been trying to use my time for good, being involved in things that I think are important and extending my network of connections. Over the last year though, I’ve had to trim this back as I’ve simply got too many things going on. I even had to come up with form letter to send out because of all the awesome opportunities I got:

Unfortunately I’m at capacity (actually probably a bit over capacity) for doing things right now and I’m going to have to decline your invitation to help with the INSERT_EVENT_NAME_HERE. This year I’ve had a lot to manage and be involved in, which is a good sign: I’m gaining responsibility and learning a lot! But when push comes to shove, I tend to eliminate the “me time” first because that’s, unfortunately, the easiest thing to eliminate. I’ve slowly but surely been pushing back on that, reclaiming the time I need in order to function in the rest of the areas of my life.

Ultimately, that results in me having to say no to a lot of great opportunities. At some point in the future I may be at a point where my other responsibilities have dropped to a point where I can take on new projects. The time isn’t now though.

This has been a season of saying “no” for me and it’s been heart breaking. You haven’t been the first person or group that I’ve had to say no to and you won’t be the last. The thing that gives me hope is that it means that I’m on to something. It means that I’m cultivating a “thing” that is valuable and people want. I just need to figure out how to clone myself now.

Until we get the cloning thing perfected, I respectfully must decline your invitation to be involved with the INSERT_EVENT_NAME_HERE. Thank you for the consideration though, it does mean a lot that you thought of me.

I was talking with some friends a few nights ago and got some solid honest feedback about what I do really well that I may not know about. A lot it seemed to revolve around this “thing” I’ve been spending my time cultivating: being honest, willing to tackle tough questions, childlike curiosity.

I’ve also had some really awesome comments from friends over the last few months about my passion for engineering, technology, and even my job.

I feel like I’m brewing something amazing, but I don’t know what it is yet. And yet I’m afraid that this thing I’m brewing won’t come and one day I’ll wake up and find that I’ve stopped dreaming, in part because I’ve tried to slow down and all the time I’ve put into it will have been wasted.

I’ve been following Neil deGrasse Tyson for about a year now — ever since I saw him give a lecture, Adventures of an Astrophysicist, at the University of Washington. I may not agree with everything Neil says, but I have the utmost respect and admiration for him. In my books, he is a champion of honesty, curiosity, and willingness. He has spent time enlightening everyone from Congress2 to the Internet at large by doing a questions and answers session on Reddit.

When asked what he would do if he were President by the New York Times, Neil answered:

The question, “If I were President I’d…” implies that if you swap out one leader, put in another, then all will be well with America – as though our leaders are the cause of all ailments.

That must be why we’ve created a tradition of rampant attacks on our politicians. Are they too conservative for you? Too liberal? Too religious? Too atheist? Too gay? Too anti-gay? Too rich? Too dumb? Too smart? Too ethnic? Too philanderous? Curious behavior, given that we elect 88% of Congress every two years.

A second tradition-in-progress is the expectation that everyone else in our culturally pluralistic land should hold exactly your own outlook, on all issues.

When you’re scientifically literate, the world looks different to you. It’s a particular way of questioning what you see and hear. When empowered by this state of mind, objective realities matter. These are the truths of the world that exist outside of whatever your belief system tells you.

Neil gets it, he rejects the status quo as insufficient. Neil dreams and he doesn’t get sucked in to Shinny Object Syndrome. Neil has a Big Hairy Audacious Goal (BHAG).

Sometimes I worry that I don’t have a long-term BHAG. I worry that I’m not ultimately working towards something that is clear to me.

Short term dreams — zero to two years — I love. I can manipulate those short-term dreams in my mind and they feel tangible (which is not necessarily the same as feeling achievable), but how do they link up? How do I take my somewhat disparate dreams and make them into something worthwhile and awesome? I worry that when I dream about my future in the long-term, my dreams are fuzzy; and it’s not because I don’t have ideas — I do. Still, I wonder what is it that I’m ultimately working toward? Am I spending my time wisely? 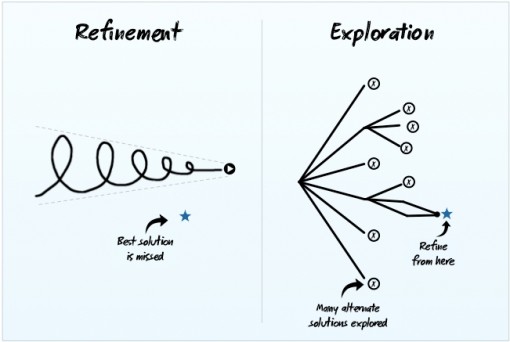 I’ve been spending a lot of time doing Exploration, and I love it. But what about Refinement? Sometimes I feel like I’m not spending enough time on the refinement aspects because of Shinny Object Syndrome. At what point do I decide to switch from Exploration to Refinement?

So that’s some of the things I’ve been thinking about lately: How do I spend my time? What is my BHAG? How do I do all of this in as a Christian? How do I know if I’m doing God’s plan?