A few weeks ago, I was invited to participate in a Planning Meeting for YMM:

UPC Senior Staff have asked a team from the Human Resources Committee to look at the current situation in the YMM Department from an HR perspective and make recommendations for a framework to move toward near-term resolution of key issues so that YMM can focus on effectively moving forward in its ministry.

The process will include a Planning Meeting facilitated by Jeff Trautman to identify compatible action steps that could be taken to meet the goals of faith development and outreach for YMM.

My desire to participate in this meeting was not to have a say about what we should be doing (e.g. planning day-to-day, month-to-month, etc), but to be present as a reflection of what is going on (i.e. the process) as I see it.

This reflection includes my experience as a former student and as a current sponsor and member of UPC. I also believe I bring a unique view to the situation, in part because of how I experience and analyze things with an engineering mindset.

The mission of this Planning Meeting was to “explore and seek our shared voice regarding the framework of YMM.”

Our process was to “consider 5 questions1 as catalysts for achieving this mission this evening”:

A “summary of our findings will be submitted to the YMM elders and staff for consideration in their discernment and development of the ministry going forward.”

We answered the questions in diverse (parents, sponsors, staff, students) groups of about five people. Each group then presented a summary of their discussion, to which the group responded and debated as a whole.

I would like to take a sentence or two to note that of the roughly 40 people present, there were ~5 elders (not all attached to YMM), ~4 students, ~4 sponsors, ~2 staff, and zero interns. It’s also worth noting that all sponsors and students present were male, and all students were either Juniors or Seniors in high school2. 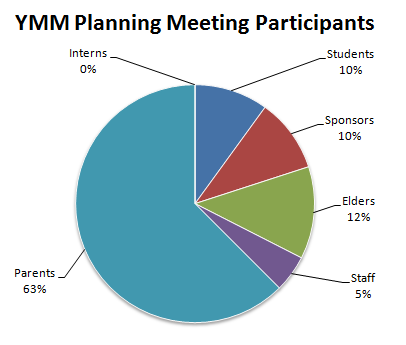 On the whole, I felt the discussion was good when compared to many of the other “events” I have been to before. In comparison, I felt like people were finally norming, instead of storming. To me, that’s positive progress. For the first time that I have been able to directly observe, people weren’t visibly agitated and while emotions were definitely present, they were also appropriately in check.

However, I still feel like something is missing. We, as a church, seem adamant on addressing a perceived fault or failure of man who was called by the Holy Spirit, presented by the Pastor Nominating Committee, and unanimously3 selected by the Congregation.

These are all good questions to be asking, however I do not believe that they are the appropriate questions to ask at this time from this local person.

This is a great method for solving issues that involve inanimate objects without feelings or memories. So when it comes to dealing with people, I think we need to take a different tack; we need to be asking ourselves is this a locally isolated issues, or is this a systems issue?

My biggest concern — and one that I’ve heard a few other people share as well, but not a lot — is that what we are observing with YMM is indicative of a much larger and systemic problem with UPC, one that I believe ultimately leads us to a lack (or an abundance) of je ne sais quoi in the upper echelons of the pastorships. This is not something that all of a sudden happened when the change in YMM leadership occurred, this is something that has been brewing and building for years. In fact, the issue may even predate the presence of some of the current pastors. This is a culture problem and it points to a gross procedural failure that is preventing us from accurately and effectively evaluating anything substantive.

I’m hurt because there has been a lack of genuine conversation and there has been little or no explanation of what is going on (at both the local and the system level), and that leaves me feeling alone and left out of a group I care deeply about.