I recently hit 70,000 downloads on Countdown Plugin, a small plugin I wrote for WordPress about five years ago. Actually, the timer is older than that. I’ve only been using WordPress since my freshman year of college (spring semester circa 2005), before that I had this crazy home brew content management system. Part of that system included the original source of Countdown Timer. When I made the move to WordPress, I forked the code and made it into a WordPress plugin. The basic and display of the timer has remained relatively similar, although the code has pretty much been rewritten. 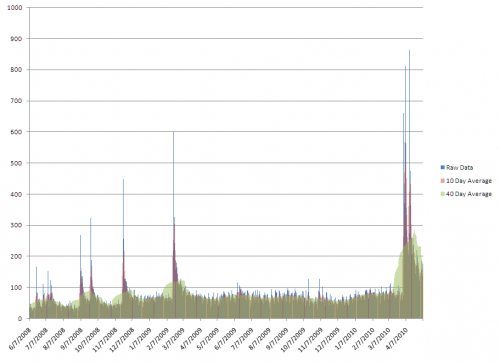 I digress. Having 70,000 is a great accomplishment. However, it’s not a very telling metric. What I really want to know is how many people are using the plugin currently?

In order to get an idea of how many active users there are, I looked at two pieces of data:

The theory is that when a new update is released, an upgrade notice goes out to all users of the plugin. This is the cause of the massive spike in downloads. By eliminating the background noise downloads (i.e. people just trying it out), I can calculate the area under the curve and get a rough estimate of the number of users. 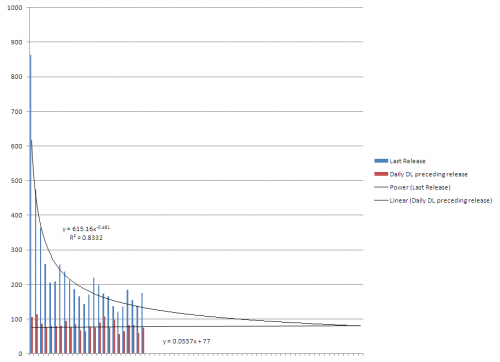 I fit a power regression line to the subsequent downloads with an R2 value of 0.83, which is a little lower than I would have liked, but still usable, described by the equation: 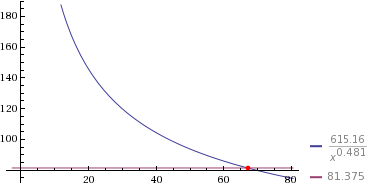 The average downloads for the 24 days prior to the release were 81.375 downloads/day. Using WolframAlpha, I solved for the intersection of the two lines: 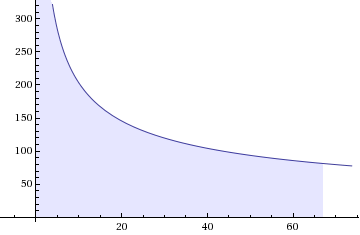 The bounds of my function are now 0 (the day that the plugin was released) and 67 (the day the plugin will again be at ~81 downloads). It’s just a mater of integrating the function and subtracting out the base downloads:

5,000 seems to be about the base number of users at this point. It will be interesting to see how this number changes over time. Especially since I have the historical data and could analyze how long it takes downloads to return to normal.