Well, I did it. I watched every single Star Trek episode and movie known to man, and then graduated1. This has probably been one of my more arduous projects. This wasn’t just a matter of putting some Star Trek on and doing homework. No, I sat through and paid full attention to every single episode/movie, all 33348 minutes worth.

As promised, here’s a chart showing the progression: 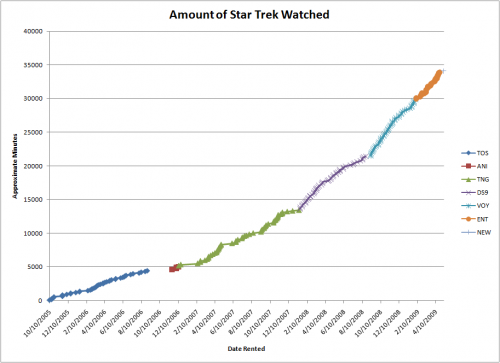 The latest Star Trek was amazing. I went and saw it opening night with at least 50 people from Mines. At one point, I even lead everybody in a round of our fight song2. 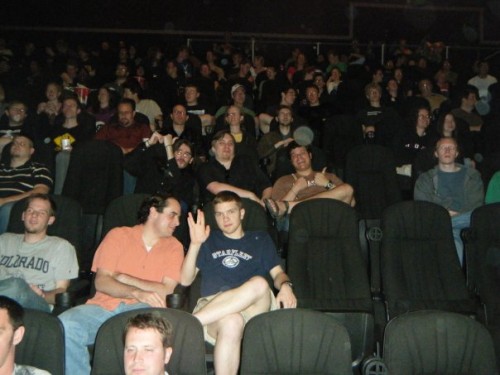 My biggest concern was how this movie was going to reconcile with traditional Star Trek lore. This short answer is: parts of it do and parts of it don’t. The mythos up to James Kirk being born are from the traditional time line, however the visuals are not. This might bug some people, and I admit it bugs me a bit, but I think it works well over all.

Anyway, the entire premise of the movie is that a rogue Romulan is thrown back in time and starts altering the time line. This creates a new “alternate” time line that is different from the Star Trek history that we know and love; anything after the events around the birth of James Kirk can be completely new. And because it’s an alternate reality, this doesn’t conflict with the rules of the Star Trek universe. J.J. Abrams can have his pie and eat it too.

I’ll admit that it’s a rather dubious move, but it’s completely valid. “The time travel story establishes an alternate reality, freeing the film and the whole franchise from continuity constraints.”3 What can I say…it works.

Two thumbs up in my book. Plus my Star Trek Seal of Approval.

I’ll also probably be seeing the movie again when I’m back in Seattle if anyone wants to go.

…and please don’t ever let me do something like this4 again.