To The Graduating Class of 2009 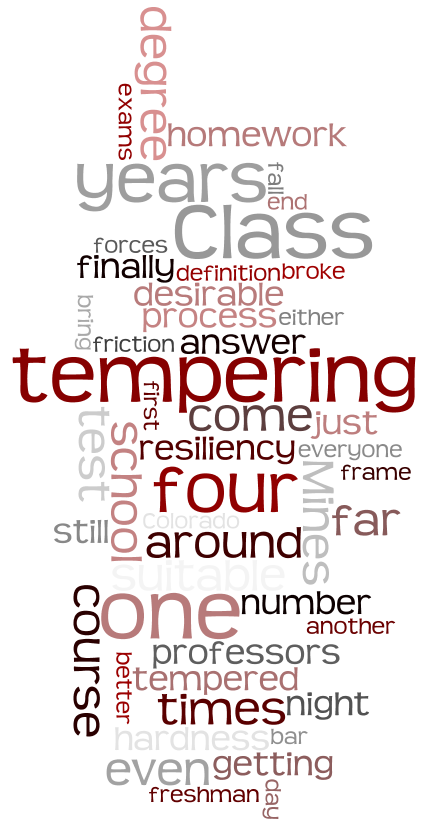 Prologue: The following is the graduation speech I wrote and auditioned. I didn’t end up being the graduation speaker, as you’ll know if you attend my graduation tomorrow. As Staples noted, “Their loss, dude. Their loss.” I couldn’t agree more. However, I put a lot of time and effort into this and still think it’s worth sharing. What’s presented below is the speech as I auditioned it, but with a couple dozen comments about my writing process, thoughts, and insides jokes. Special thanks to Corinne Johnson, Audrey Nelson, and especially Jeff Staples for reviewing this and giving me feedback.

The idea for giving the graduation speech started almost a year ago, as I was listening to the 2008 graduation speaker. I distinctly remember two things: the guy gave a pretty crappy speech and I could do significantly better, at least in my estimation.

I started working on ideas over the summer. Writing down themes, quotes, and phrases that came to mind. Eventually, I had a working copy. And finally I had this.

This was probably one of my best kept secrets during senior year: Codename Shakespeare. Initially, only one other person knew about it. However, as the date for tryouts grew closer, I had no choice to but let a few more people in on my little secret, although I still managed to keep the circle small. Before now, no more than a dozen people knew about the speech and even fewer had seen or heard it.

I think what’s most striking about this speech is how it contrasts with my high school graduation speech, especially in terms of target audience, content, and style.

Anyway, thanks for hanging out with me here on Andrew Ferguson dot NET the last five years. It’s been really fun. I look forward to the next 5 years and hope you’ll stick around.

President Scoggins, distinguished trustees, faculty, and alumni, proud parents, grandparents, friends, and, of course, members of the Class of 20091: after years of toiling, we’re finally finished. We’ve persevered — and some might even suggest suffered — through the four, five, or even six or more years of university. Along the way, we have been tempered2- by our professors, by our course work, by our friends, and by our school.

It is this process of tempering that I wish to speak to you about.

The act of tempering is generally defined as performing some action “A”, to some object “B”, to bring it to some new state “C”.

This could be, as Oxford defines it, as simple as “mingling one ingredient together with another, in proper proportions.” Such as might happen when students, and professors, from around Colorado, the United States, and the four corners of the World come together at an institution such as Mines.

This mingling process started even before school did, when we moved into the dorms3 our freshman year. Floor events organized by our RA’s forced us to engage with others, rather than staying inside to play video games by ourselves. This process was furthered by the small class sizes, smaller study groups, and even smaller lab groups. These intimate learning opportunities would lay the foundation for everything to come. At Mines, I wasn’t simply being taught, I was being educated4. Little did I know what I was getting myself into.

Another definition of tempering reads: “to bring into a suitable or desirable frame of mind.” One of the first classes everyone at Mines is required to take is Physics One. When I took physics, four years ago, the class was taught by a pony-tailed hipster named Professor Kelso — who, at the beginning of class, would often ask obscure science fiction questions in exchange for a candy bar5. Between the early morning lectures, late afternoon labs, and all night LON-CAPA homework sessions with fellow students, something interesting started to happen.

My world view — my frame of mind — began to change. I would look around and instead of seeing actors in a play6, I starting seeing forces and relationships: A father applying a 147 Newton force at a 428 degree angle as he pushes his son — who masses roughly 319 kilograms — on a swing that’s suspended two meters below a bar.

Perhaps a more applicable example: the ice that forms on those cold winter mornings in Colorado: What’s the coefficient of static friction on that ice? How fast can I run to my 8am class before I overcome that static friction and starting sliding? Once I do start sliding, how far will I go before I fall on my face? The answers is, predictably, not that fast and not that far; somewhere between two and three meters per a second for a distance of 8610 centimeters .

Of course, being a school with a mining background, it would not be fair to overlook the metallurgical implications of tempering.

The most common definition of tempering occurs when one brings “steel to a suitable degree of hardness and elasticity or resiliency by heating it to the required temperature and immersing it, while hot, in some liquid, usually cold water;”

This past semester, a friend of mine, Islin Moy, wrote a short note entitled, “Engineering Should Come With a Warning Label.”11 It reads, in part12, “In your senior year, second semester, you will experience stress levels not felt since failing your first test, over a prolonged period of time, at the same intensity. This is due to senior design and the random decision of professors to double your workload13. Senioritis and the general decline of your attitude towards school doesn’t help either. The question is, do you really want to graduate? If the answer is YES, then forge ahead, sipping your energy drinks during the day14 and taking your sleeping pills to fall asleep at night, only to wake up 4 hours later. There is no such answer as NO. You got this far.”

The last four years have been about tempering; about becoming hardened and resilient. This was accomplished by subjecting us to homework assignments that took all night long, near impossible projects , and test, after test, after test. We will inevitably grumble about these things, just as the hot steel screeches when submersed in the cold water15. However, one cannot deny that, at the end of the day, we are better for it; having been brought up that “suitable degree of hardness and resiliency.”

It is to this hardness and resiliency that Islin referred to when she wrote, “There is no such answer as NO. You got this far.”

Of course, this doesn’t mean it was easy getting here. As Jenny Holzer, an American conceptual artists, once quipped, “Some days you wake up and immediately start to worry. Nothing in particular is wrong. It’s just the suspicion that forces are aligning quietly and there will be trouble.”

There was definitely trouble. I can’t tell you the number of times I broke down in tears. I think only one of those times I cried over a girl16 — and she was from Boulder17 — but the other times I broke down for any number of reasons ranging from homework that was too hard or not well explained, to a chemistry lab that wasn’t going the way it was supposed to18, or just the general stress from being away from my home in Seattle.

As a freshman, I often bounced between elation, such as when I finally understood that one equation, to depression, over scoring low marks on any number of exams, to agony, after realizing I still had four more years left.

Four years later, and I’m still excited when I finally get some concept in class, and I still feel a bit queasy after getting some exams back. However, my overall emotions remain in-check and tempered, “reduce[d] to [a] suitable or desirable middle degree or condition free from excess in either direction.”

I expect that it is this desirable emotional middle ground that we will call upon many times during our careers. When the pressures of deadlines at work see everyone around us crumbling, we will stand strong. When the ethics of a project come into question, we will be brave. When the task at hand is so monumental, it will make going to the moon19 look like driving around the block, we will be triumphant. Through it all, and more, we will persevere20: because we are tempered.

So, where does that leave us? The end result of this tempering processes is a better and stronger product than the original. As such, we leave Mines as learned engineers, knowing more than we did coming in, confident that we have many21 of the tools we need to succeed in our endeavors. As Dr. Spock, the pediatrician, not the Vulcan22, once said, “Trust yourself. You know more than you think you do.”

Now, go forth and make wonderful things, do good for the human race, live long and prosper23.