On Thursday, I went to my first blog meetup in almost a year when I hit up the Front Range Meetup. This one was different though.

Instead of the usual 10-20 or so bloggers that might come, there were probably close to 150, if not more.

What could possibly unite so many Seattle-area bloggers? Chris Pirillo and the promise of free booze. Okay, mostly just Chris.

I had never met Chris before, but I read his blog and he’s a very smart guy. Thus, getting a chance to met him was an attractive proposition in and of itself.

The party was hosted by Fisher Communications, which owns KOMO-TV (ABC 4), KOMO-AM (1000 AM), and several other entities. Fisher recently bought Pegasus News, a hyperlocal media company out of Texas.

Hyperlocal is basically just a fancier way to say community-level news. [1] There appears to be a growing market for the ability to collate multiple sources of location specific information in a single location.

Interestingly enough, there was no formal discussion of anything. It would have been nice to maybe have something to talk about. Perhaps just a list of questions passed out or posted somewhere that would get the conversation started?

I did talk with Rob Dunlop, VP/Developing Media of Fisher, for a few minutes. I had never heard of Pegasus News before Thursday, so I was curious to see what Fisher’s plans are. Either Dunlop was being coy, or Fisher really doesn’t have any idea what they’re doing yet.

Not to say that it’s a bad thing. Just different. But different could be a good thing here.

I did do my best to meet some new people and catch up with some old ones. TDavid was there as well as Jerry Kindall and Mac and Jack. I also met a couple new people: SJ, Kevin Freitas, and Lacroix. 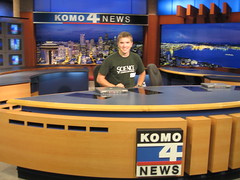 I even got to sit behind the KOMO 4 newsdesk!