The fact that I even heard that the Stardust was going to be demolished was, as usual, by shear luck. Bailey and her boyfriend, Shaun, were going to be in Vegas for a few days and we were going to go grab something to eat. She sent me a text message:

Do you know they are leveling a casino tonight

No! Really?!? Which one? We should go watch!

I know! The stardust at 230 am. We were warned we might lose our windows

That’s how I found out about the Stardust.

I headed out early so I get finish shooting some other lights on the strip before I headed up north to the Stardust. A funny thing happens when you walk around by yourself with a nicer looking camera and a nicer looking tripod: people ask you questions. Here I was, not even 3 days in Vegas and people already thought I wasn’t a tourist. 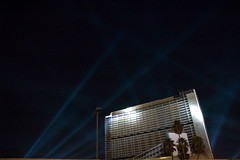 I started heading towards the Stardust around 1 am. I wanted to find a good spot. As I got closer, I could see the building lit up with fancy lights that moved around and changed colors. They were the kind of lights you might see in sets of three at the opening of a new store that shine a tower of light into the night sky. 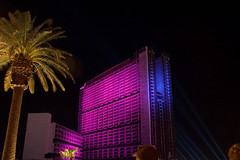 I scoped out an area south of the building. All the media was setup there and people were all setup, lawns chairs and all. I continued walking north trying to find a few point that would be well lit, aesthetically pleasing, and unobstructed. I finally found a spot right in front of the Denny’s across from the Stardust.

There was an older gentleman next to be with somewhat curly flowing black hair. He wore jeans and a wool trench coat. He spent the entire time talking to his mom, who was standing next to him, recounting stories about such-and-such a party in this room, this-girlfriend in that room, who’s friends stayed in what suite, on and on. Did I mention he was drinking Miller Genuine Draft? He was. Quite a character.

About five minutes prior to 2:30am, a single firework went up. 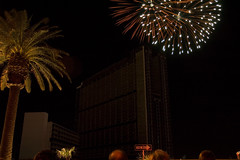 Everybody grew silent. It was a test, just to make sure the prevailing winds wouldn’t blow the fireworks right into our faces. There was an ever-so-slight breeze blowing toward us; other than that, it was pretty calm.

A few minutes after 2:30 am, the something that sounded like an air raid siren went of. The time was here at last! Glorious destruction! 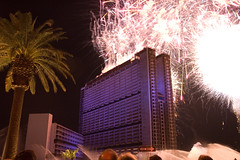 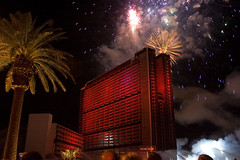 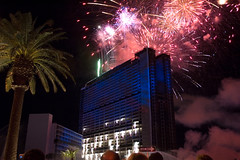 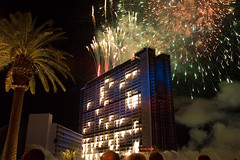 The question I kept asking myself the entire time was, “How are they going to signify the start of the actual destruction?”

This was Vegas though, such foolish questions should not be asked.

After the main fireworks ended, a box of fireworks began to appear… 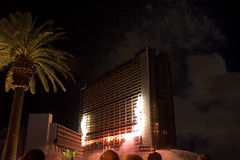 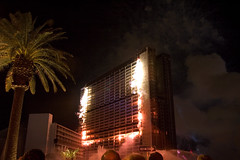 …and then it all made sense! 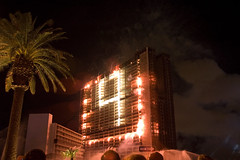 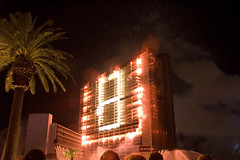 Despite the fact that it was past 2:30 in morning, the people started chanting. Seven! Six! The crowd became louder as the numbers became smaller. Five! Four! Three! Two! 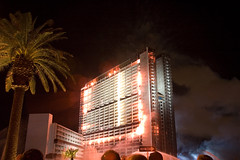 Everyone started screaming. It was loud, but it was about to get louder.

Like the lightning before the thunder, bright shimmers of red light flickered on each floor. Then the most deafening sound I’ve ever heard. We weren’t that far away to begin with, only a mere 200 meters or so. My best guess is that the sound wave was in excess of 140dB at the point I was standing. 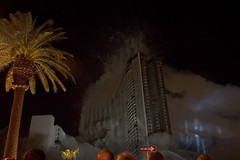 Ashes to ashes, Stardust to dust. (I never promised no horrible puns) 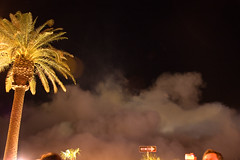 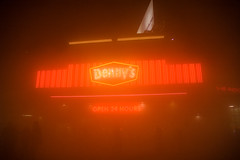 The real excitement was when the dust started coming towards us. Everyone decided they didn’t want to stick around for that and cleared out pretty quickly. It turned my camera around, snapped a quick shot and then zipped everything up. As I walked back towards Caesars, the dust cloud kept growing more dense. Everything became covered with a rather thick layer of dust. As I walked, my shoes left marks in dust. I thought about Mount Saint Helens exploding, walking on the Moon, or the destruction of the World Trade Centers. As I neared the Fashion Show Mall, horns were blaring. I wonder what the people who hadn’t know about the implosion were thinking?

I drew a bath and soaked for a while, listening to the latest headlines on CNN. Then I went to bed.

Update: Some of my photos were published.