A Trip to In-N-Out Burger

The last time I was In-N-Out Burger was August 14th, 2004. I know this because I have a photo of Charlie Wyman standing in front of the In-N-Out burger in Redding, California: 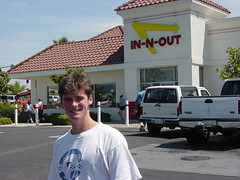 Little did I know that it would be an entire 2 years and 7 months until I would lay mine eyes upon an In-N-Out Burger again. I really only had two “must-do” goals of Vegas: Star Trek: The Experience, check; and In-N-Out Burger. Getting there wasn’t going to be easy though.

I knew there was at least one In-N-Out Burger in Las Vegas, but I didn’t know where it was. From my hotel room, I started my quest. The ever so helpful In-N-Out Burger website listed seven joints in Vegas. The two nearest me were on Sahara Avenue and Maryland Parkway.

While I was walking the strip, I contemplated walking to In-N-Out Burger. It would have only been an extra 2.1 kilometers or so, on top of the 3.4 km I had already walked: 11 clicks total. I decided against that. I was tired and my feet hurt. As I gazed off towards my Holy Grail, I felt uneasy. From what I recalled about the map, I had to cross I-15 and I wasn’t sure what the state of the sidewalks were, if any. I nixed walking.

I also thought about taking a taxi, $3.25 for the first 1/8 mile, and then $0.25 cents a 1/8 thereafter: probably somewhere around $10 bucks total, somewhere around twice the cost of my meal I guessed. I ended up deciding against that, not because of cost because I was worried I might not be able to get a ride back (some of the taxi’s had signs on them restricting them to only working the strip and I wasn’t sure how the rules worked pertaining to that). I nixed the taxi.

I also had a time constraint to work with, Jacqueline would be calling shortly I didn’t know how much time I would have eating. I wanted to savor my In-N-Out experience. I nixed In-N-Out Burger for Sunday.

I woke up Tuesday, just a bit after 9am (and only 4 hours of sleep). After getting all packed up, my first order of business was to find something to eat. In-N-Out Burger seemed to be the perfect solution. Seeing as this was my last day, this would be last chance for some In-N-Out Burger for…a while.

One of the many cool things I found about Vegas was The Deuce and the $5 24-hour bus pass. The Deuce is a double decker bus that runs up and down the strip, with pickups every 8 minutes (or so the schedule says). The 24-hour pass lets you ride on The Deuce, plus the RTC, CAT and MAX Line. In short, a really cheap way to get around not only the Strip, but also all of Vegas.

Even better, the RTC has website with a trip planner! I keyed in Caesars Palace and the two In-N-Out Burger’s I had found earlier. As it turned out, the In-N-Out Burger on Maryland Parkway was a better location; it was also next to the UNLV campus, which seemed appealing for some reason. I scribbled down some notes in hastily made up shorthand: walk down to Flamingo street, catch a bus, ride it to Maryland Parkway, get off and walk diagonally to catch another bus, get on the bus and wait for it to get to In-N-Out Burger. To get back home, I just needed to reverse the procedure. Forty-five minutes each way; not something I’d do everyday, but every couple years…I could manage that. 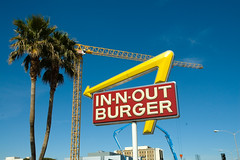 And so I was off. The ride was more or less uneventful. I was mostly focused on not missing my stop. Once there, I ordered a Double-Double Animal Style with a lemonade and chocolate shake. The total trip took about two hours.

I just hope I don’t have to wait another two years again.