Come in! Pull up a stool! Order a drink! Let me tell you the story of when I met Dave Matthews.

It all started the day of the concert with a phone call from my good friend Brittany. I know Brittany from Seattle and she goes to college down Colorado Springs. The phone rang just before 2:30. I answered:

“Hello?”
“Hey Ferg.”
“Who’s this?” I asked. My phone was broken and I only have about a dozen phone numbers programmed into it.
“Brittany.”
“Oh hey.” I explained the situation with my phone.
“So are you busy around 6?”
“Um, no. Not really. Why, what’s going on?”
“Wanna go see Dave Matthews?”
“Um, sure.”
“And meet him in person.”
“Yea, I could probably swing that.”

I certainly could swing that. With all my homework complete, my evening was free. Free tickets to a Dave Matthews Band concert and a meet and greet? How could I be so lucky. I took off for the Pepsi Center just before 5:30, less then three hours after Brittany had originally called. We grabbed a bite to eat before heading to Will Call for our meet and greet.

Twenty people were on the list to meet Dave, yet only 12 showed up. I have no idea why the other 8 didn’t show, but they didn’t. We were taken around to the secondary entrance and whisked through the VIP check-in. The security was pretty tight. Complete pat down and a bag check.

Down a hall and into a waiting room we went. We went in single file, lining up with our backs to the wall in a contorted horse shoe shape.

Meeting Dave was pretty cool. I’d venture to guess that he had a little too much Fat Tire. But he was very personable and very low key. All the girls were crying and very emotional, except for Brittany. Very funny. I didn’t really have much to say to Dave. So I just said that I was Andrew from Seattle. The rest of the guys seemed to share my stance. Dave also seemed more interested in the women too. As Dave went around the group, he would sign whatever you had and pose for pictures. I didn’t have anything for him to sign, so I just had him sign my ticket.

The girls all hugged Dave goodbye and then were were taken back out the foyer area. We found out seats and listen to the very tail-end of the opening band, Robert Randolph & the Family Band. After a quick 30 minute setup, they entered.

In case you don’t know this. Concerts are loud. Very loud. While I didn’t have my decibel meter with me, I would estimate that it was easily 110 dB (think Football stadium during kickoff at 50 yard line) on average with peaks to 120 dB. Don’t forget that the decibel is a logarithmic function, not a linear one. In short, 120 dB is 10 times louder then 110 dB. (See more: http://en.wikipedia.org/wiki/Decibel) 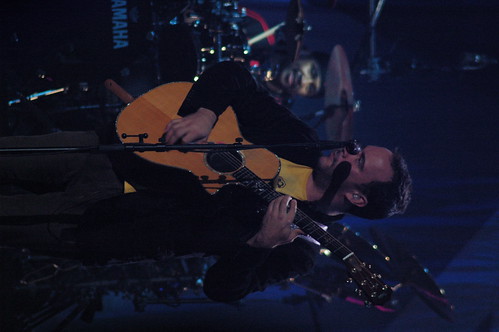 Almost three hours later, Dave was done. He came back for a three-song encore.

And that’s how I met Dave.