Unless you go to college, you may not have heard about the recent revolt against Facebook this week.

Tuesday morning, after a wonderful three day weekend for most (but not me), Facebook updated their website with the now infamous “News Feeds.” Within hours, people started revolting by the masses. A group called “Students against Facebook News Feed (Official Petition to Facebook)” was created and within hours over 10,000 people had signed up. A large number, but only a fraction of what would happen. By the end of the day, that number had increased nearly ten-fold to over 100,000.

Within a a few rather long days, that number would eventually reach over a quarter-million users. 750,000 out of 8,000,000 doesn’t seem like a whole lot, but it is. The issue at hand was a perceived invasion of privacy. I used “perceived” because while no new data was being collected or mined, users of Facebook did feel like their lives had been taken to a whole new level of openness.

The feature in question appears on the user’s home page and looks like a glitzy laundry list. It chronicles every action a user’s friends have recently taken on Facebook. These include the mundane: Sally befriended Joan, the boring: Tim now likes The Daily Show, and the juicy: John and Beth broke up. And in case it matters, each action is time-stamped to the minute.

What came next was pretty amazing, and not in a good way:
In a post titled “Calm Down. Breathe. We Hear You.” Mark Zuckerberg, head of Facebook, writes, “We’ve been getting a lot of feedback about Mini-Feed and News Feed. We think they are great products, but we know that many of you are not immediate fans, and have found them overwhelming and cluttered.”

Calm down? Why should anyone calm down? Facebook managed to alienate a very significant number of their users with this “upgrade” and they want them to breathe. I can see it now: a group of Facebook students crowded outside Mark Zuckerberg’s Palo Alto office shouting “I’m mad as hell and I’m not going to take this anymore!”

Why not just roll back the update until a suitable solution could be found?

As tension between Facebook users and Facebook-the-company grew, a temporary fix emerged:
In addition to having a News Feed on your homepage, each user also has a Mini-feed on their profile page that details just their actions. 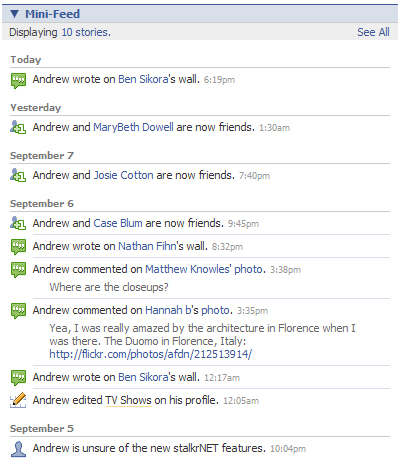 Clicking on the “X” would remove that item from both your Mini-feed and the News Feed of your friends. But users would have to click through up to 10 “X”‘s to remove all the items. A spiffy, Javascript-based bookmarklet, Nuke Facebook Feed Items, let users easily remove all items.

Then early Friday morning, Mark posted another article, “An Open Letter from Mark Zuckerberg:” The first sentence said it all, “We really messed this one up.”

People, and companies, are going to make mistakes. That’s a fact. While fessing up your mistakes should be a requirement, it’s not. Robert Scoble pretty much sums it up:
From scobleizer.wordpress.com:

Notice how different this is from how HP is handling things? Where’s the HP’s CEO’s blog?

Scoble is referring, of course, referring to the recent HP Privacy Fiasco.

I digress. Zuckerberg continues, “When we launched News Feed and Mini-Feed we were trying to provide you with a stream of information about your social world. Instead, we did a bad job of explaining what the new features were and an even worse job of giving you control of them. I’d like to try to correct those errors now.”

Facebook decided not to roll back the changes, I still think they should have. Instead, they opted to add more privacy features.
From blog.facebook.com:

This new privacy page will allow you to choose which types of stories go into your Mini-Feed and your friends’ News Feeds, and it also lists the type of actions Facebook will never let any other person know about.