Dad and Brian arrived slightly earlier then we thought they would last night, but that was. Dad brought computer, so I was able to take a break from watching CNN International and was able to watch two more episodes (one disc worth) of The Prisoner.

The only thing planned for today was the walking tour of the Uffizi.

After staying up a little later then I should have, I woke up, grabbed a quick continental breakfast downstairs, and then went back to bed, finally waking up around 12:30pm.

The Uffizi is one of Florence’s most popular attractions. Not being an art buff, I had a hard time truly appreciating all the items inside. I personally think the history of the building is more interesting then the thing inside.

The word Uffizi comes from the Italian word for “offices,” as in office building. The building was built around the mid 16th Century for the Medici family. They used the top floor to store items they collected, thus turning it into a private museum.

Eventually the Medici family lost control, the Uffizi was turned over to the public, and a museum was born.

With the official tour complete, we went to the cafe on the roof and had a quick break.

View from the top of the Uffizi looking at Duomo: 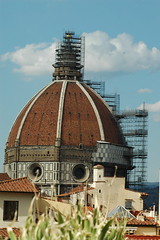 The Uffizi did have an excellent special exhibit on Leonardo da Vinci. The tour guide informed us that Leonardo’s last name is actually not da Vinci. Da Vinci means “from Vinci” which is now called Florence. Leonardo’s last name is actually “di ser Piero”, which means “son of Piero”. Thus his full name becomes “Leonardo di ser Piero da Vinci”, or “Leonardo, son of Piero from Vinci.” Leonardo was an unusual name for the time, so it was simple enough to call him Leonardo from Vinci, or Leonardo da Vinci. 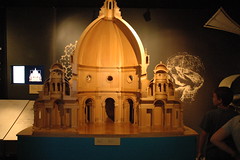 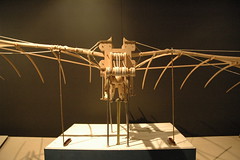 As the sun began to set, we made our way to the Piazzale Michelangelo, known as the premiere spot to watch the sun set. It really is: 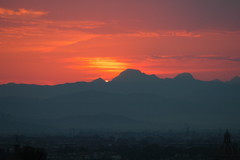