First off, the keyboard here in Italy is even weirder then in London. Second, Italy requires, by law, businesses that offer Internet access to the public to ask users for identification. Somehow that’s supposed to thwart terrorism. Whatever. Here’s an USA Today article on it

(Note: I just figured out how to remap the keys on the keyboard to use the United States layout. This should go smoother now).

We took a taxi from our hotel (Columbia Hotel) to Gatwick airport (see map). The ride took over an hour, which is rather long considering we only went 30 miles.

Check in was simple and security was lax, especially by our standards.

After you pass through security, you end up in an area which I can describe best as a holding pen. You don’t know what gate you need to go to, so you just hang around here with everyone else until the monitor is updated with your gate information. 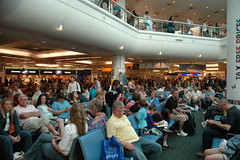 I took the opportunity to look at the shops and contemplate buying some earphones as I broke mine on flight from LAX to London. Despite the duty free pricing, the exchange rate was still horrible enough to prevent me from buying anything. I did, however, discover that I “own” an electronics brand. 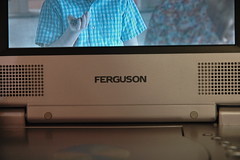 Our gate number was finally displayed and we walked over to our gate “holding pen.” 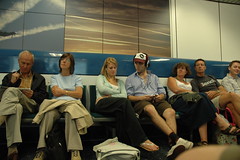 We boarding our Airbus A319 from the outside, not on a jetway. I’ve never done that on plane of this size before. 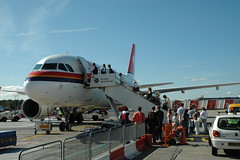 We were pushed back by this beast and then we took off! 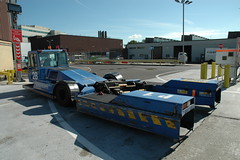 The flight was two hours long, but we also gained an hour (take note! I’m now +0200 GMT, which is 9 hours a head of pacific time.

We landed, walked down the stairs, and boarded a bus to the main terminal. We passed through customs in about 30 seconds and then mom picked up her checked bag. 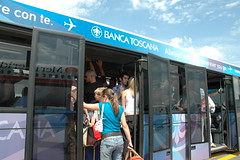 This was the first country we’ve been in that is predominately non-English speaking. We spent the next 10 minutes trying to figure out where to get Euros and where to catch a vehicle of some sort to the city center so we could get to our hotel.

We were finally able to catch a bus. Once we got of the bus, it took another half hour to go the 200 or so meters to our hotel.

The weather outside was sunny, 32 C. In the last few hours, though, it’s turned very cloudy, although still very hot. And now it’s raining.