After playing one last game of Settlers, I hit the sack at 3am Thursday (-0700 [i.e., Seattle time]). I slept ’till 9ish and then finished up my packing, which entailed going to REI to get a new Nalgene bottle, a carabiner, and some webbing to make a holder for it. 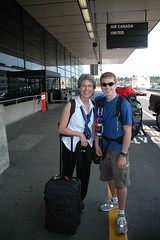 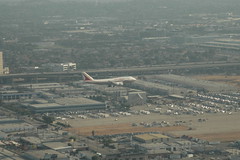 It’s a crappy picture, I know. But I was in another airplane, going some 150 knots.

Once we landed, we pretty much hopped off one plane, walked 50 feet and hopped on another one. And thus began 9.5 hours of flying. The flight over was as expected: long, boring, cramped, long, and restless.

I watched not one, but two movies: Inside Man and Mission Impossible: III. Pretty good movies, although there was this big gap in MI:III where they decided they need to do something important and critical to the movie and then it’s all done. Weird.

I also started into a new book: The Restaurant at the End of the Universe, the sequel to The Hitchhiker’s Guide to the Galaxy (see also Canyonlands: Ontario Int’l Airport). 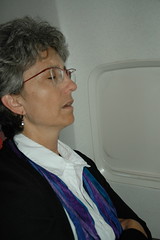