Notice: I use the original meaning of hack – “a clever or quick fix to a computer program problem.” Don’t confuse it with crack.

All the computers on campus are set to 1024×768 resolution, which is fine and sure beats 800×600. But it’s not native resolution and the only think I hate more than having to operate a computer at less than 1024×768 is using a LCD monitor at its non-native resolution.

I tried manually changing the resolution on the computer, but I got shut down:

I gave up until today. I’m at the library finishing up homework and I wanted to use Remote Desktop Connection so I could have a bigger screen for my laptop. I copied the RDC files over from my Tablet and I was able to connect: 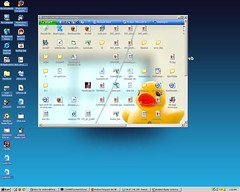 But I still had that not native resolution problem which was even worse because my tablet normally runs at 1400×1050. And then I found QRes.

It’s a simple command line program that lets you easily change the monitor resolution (and other settings) to pretty much whatever you want to. It’s simple. It’s easy. It’s free. And you don’t have to install anything.