This post seems to be older than 17 years—a long time on the internet. It might be outdated. 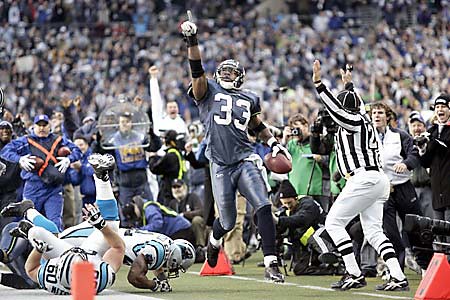 From The Seattle Times:

Say it again just to make sure it’s for real. Or say it because you like the sound of it.

Because it is for real. The Seahawks are going to Detroit for Super Bowl XL as NFC champions after their 34-14 win over the Carolina Panthers today at Qwest Field.

The Seahawks will play the Pittsburgh Steelers at 3:30 p.m. on Feb. 5 (Channel 4). The Steelers, the AFC’s sixth seed, won their third straight road game in the playoffs, beating Denver 34-17 today.

Thirty years into franchise history, Seattle is playing for the NFL championship for the first time. The Seahawks earned their place in much the same way they have won games all season: A balanced offense with a tempo that threw off and tired out the opponent, and a big-play defense that once again was stout in defending the run.

Reminds me of a similar headline 11 years ago:

Oh, How Sweet It Was — Fans Cheer M’s Back Onto Field For Salute

After a month of raucous holiday, the end came as softly as an evening prayer, unanswered.

The Seattle Mariners, unable to muster any of the mighty offense that has become their hallmark, lost 4-0 last night to the poised and powerful Cleveland Indians.

With the victory, the Indians won their first American League pennant in 41 years and advance to the World Series.

The Mariner season and first-ever playoff appearance ended with the loss. What did not end was the love affair between the Mariners and their fans, who have thronged to the Kingdome for the past month to watch an imperfect team overcome the California Angels’ 13-game lead, political turmoil and its own imperfections.

As the Indians celebrated on the field and Mariner second baseman Joey Cora wept in the dugout, the fans stood and cheered for 15 minutes following the game’s last pitch. They cheered until their shouts and applause brought team members back onto the field; then they cheered some more.

Players returned the applause and tossed souvenirs – balls, caps, and, in the case of outfielder Vince Coleman, his shirt – into the crowd. Coleman’s was in some ways an act of atonement. He had been nearly shunned from the game for tossing a firecracker into a group of fans two years ago.

Cora, who made crucial errors during the game in the field and at bat, was one of the last players to return to the field. He cheered the fans. They cheered back.

Seattle Manager Lou Piniella, wiping a tear from his eye, said he had never seen anything quite like it.